So there is such a thing as too much Bosnian coffee, and I have sipped on beyond it. Tiny cup number four clatters in my hand—three were invitations at various points around the city and one was ordered by accident. The waiter hurries with my food. “Finally,” he says with a smile, though I didn’t notice a delay. He just wanted to say, “Finally,” I think, and watch me write it down.

The pizza has ketchup on it. I get a vivid sense memory from another trip, and smile to myself. The waiter accepts my smile.  He’s the only employee not wearing argyle. The trend seems a random act of coordination on the part of his co-workers, rather than a choice of uniform my waiter rebelled against.  Customers come and go with mohawks, mullets. I grin at this as well, which my waiter sees again. I turn back to my notebook. I aim to be mysterious enough not to let on that I can say almost nothing, even after some relatively honest pre-trip studying. Anxiety erases my flashcards.

I finish my food, my coffee, my writing. As I leave, pulling the door closed behind me, the handle comes off in my hand. I gasp, briefly crediting my own strength.  An employee claps. My waiter smiles again and waves me on as I blush. Perhaps it happens all the time. I place the handle on a table and sheepishly depart.

Far, far too much coffee. 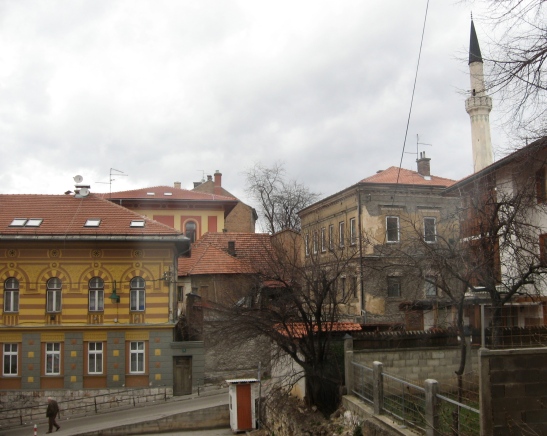 19 comments on “My Shaky Sarajevo Notes”