From a spot in Gülhane park, one can keep a clear sight of the lines of people posing with the Atatürk statue. A bronze figure on a stone base, he is a prime spot for visitors to pay their respects with a flash. Many people climb up to lean on their leader, others stand politely in front. A tall man in pointy shoes crawls up, then leans into a plié to fit in the viewfinder.  Small boys hustle to the statue and pat Atatürk on the shoe.

A teenager puts her arm over his, her palm resting on top of his hand as she cocks her head to show off her neck, though his forward gaze remains. When it is her friend’s turn, the second girl stays more modest. She collects her skirt before stepping up on the base. She smiles with her lips closed and gingerly pinches his elbow.

A man helps his roughly seven-year-old son up onto the statue while his smaller daughter rushes and leaps up on her own. She grins back at her mother’s camera, then when the photo is done, she hops down again and runs into the grass. Her father helps her nervous older brother climb slowly, cautiously down to Earth.

A woman with extremely long hair places one foot in front of the other so she will appeal tall and slim. Then she waves over her taller and slimmer boyfriend to stand behind her. Balancing on the edge of the base, they lean their heads together like an engagement photo, the Father of their Republic giving them away. 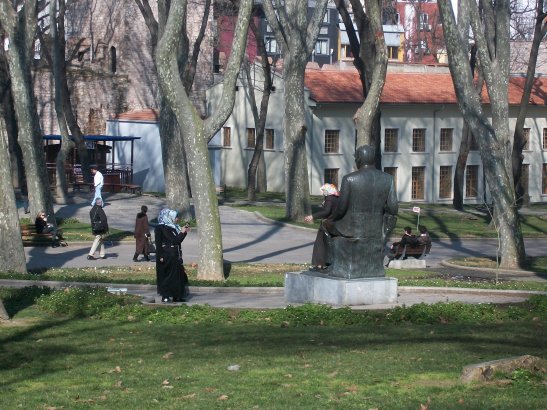