The Trigger Man (A Guest Post by Clayton Lovett)

My friend CL is insightful, clever and a gifted storyteller. He’s also been following and supporting the blog since the beginning. Since he’s living in Brazil these days, I asked him to be on the lookout for some Nice Things stories from the southern hemisphere. I’m delighted to share his tale.

*
He leaned in and took aim. The shotgun of one of the men in his sites was enormous. From this close distance, it looked like he could get them all, the three officers and a civilian woman, in one shot. I couldn’t believe that this was happening on Brazil’s most-famous street, Avenida Paulista, in broad daylight. A quick movement of his trigger finger and it was all over.

“Can you do it again?” asked the civilian woman.

“Of course!,” the trigger man said happily as he refocused the camera.

“Make sure you get the gun in the picture!” she giddily instructed.

It’s not every day that one gets a glimpse of Brazil’s Tropa do Choque, the country’s riot police unit, and scores of the thousands of demonstrators flooding São Paulo’s Avenida Paulista to voice their opinion regarding that days lower house of Congress (the Chamber of Deputies) impeachment vote on Brazilian President, Dilma Rousseff, were taking advantage of this unique photo op en route to occupying the street.

The trigger man on the camera, Choque Trooper #1, was was completely absorbed with his task of taking pictures of the civilian woman as she posed with Choque Troopers #2, #3 and #4. In between every couple of snaps, he would present her with his work, and as she evaluated, he would ask if she wanted more pictures, or a better angle. The troopers posed with all comers, and were always ready to snap the photos themselves for any demonstrators who had hit the streets solo, handy with seemingly any type of camera or smart phone passed their way.

It was a curious site to see the demonstrators posing, smiling and laughing with the same, gun-toting, bullet-proof-everything clad public servants who were called to work this Sunday afternoon to ensure, with force if necessary, that none of them got too out of control.

As the mid-afternoon sun baked the streets of Sao Paulo, and millions across the country sang, chanted, screamed, yelled, and in some places fought to emphasize their political beliefs, this little corner of the country was a happy, peaceful place, where each group appreciated the uniqueness of the opportunity to interact with each other. 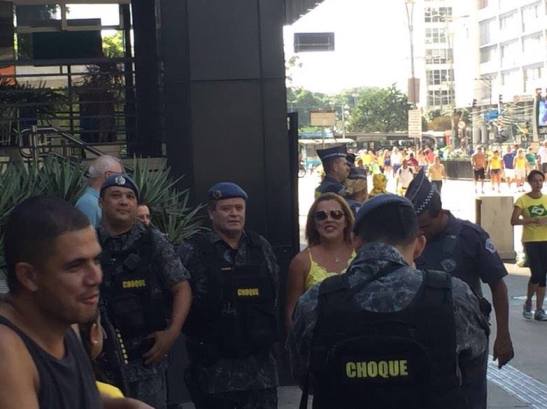 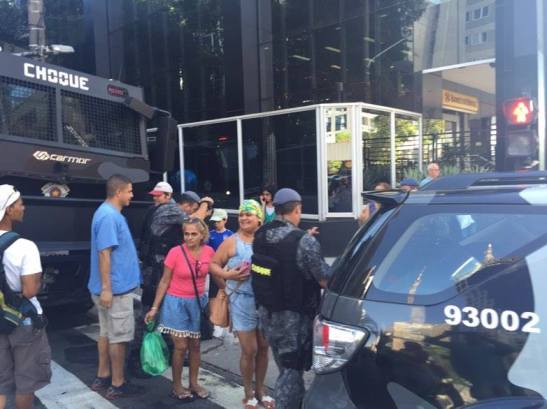 This entry was posted on May 11, 2016 by thenicethingaboutstrangers in Travel.