Airport Starbucks: No, I am not an Inspector

The people at Starbucks always spell my name Peych (or Peç), so I answer to it. At the Ataturk airport Starbucks, a barista with very dark, but well-groomed eyebrows calls, “Black coffee Joe, Black coffee Joe,” and I smirk to myself as I do so often. I have learned to keep company with myself, to enjoy openly the details that have caught my attention.

Someone asks a barista the time and he answers, “Ten t-w-en-ty fife.” Turkish pronounces every letter (let’s not get into the soft g right now), so it isn’t a tw, but a t-w that he shares. I think I will miss these things when I go home.

A customer at the other end of the counter has been watching me in my observations. I noticed him watching. He sees me with my notebook and asks if I am writing a story about the Starbucks–and if he will be included. I say, “No, not you, but him,”–the employee who said t-w-en-ty and who is seated between the man and I on his break, now with a mouthful of a sandwich and no idea what we are saying. The snubbed man departs, I shrug at t-w-en-ty and wish him a nice day at work.

P.S. A friend later relayed that all the employees that day thought that I was from corporate. It’s always rather flattering to be considered a spy. No, he had to explain, she’s just a writer. 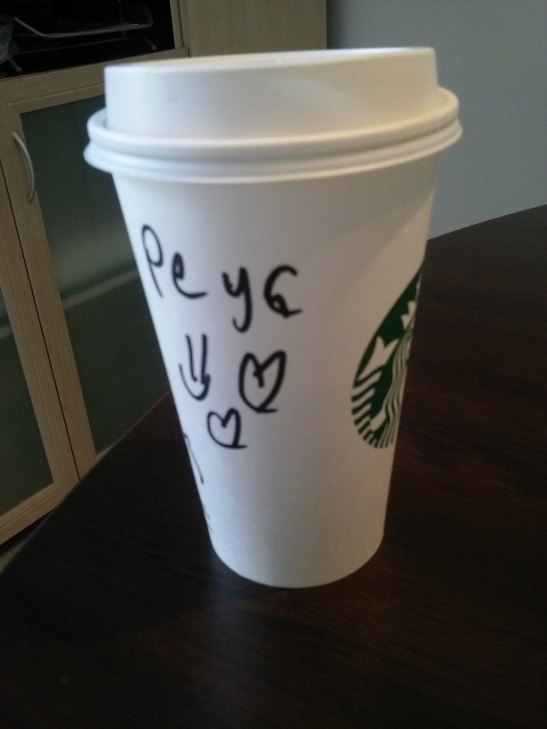 5 comments on “Airport Starbucks: No, I am not an Inspector”

This entry was posted on December 28, 2015 by thenicethingaboutstrangers in Travel, Turkey, Writing.