In the bakery in Budapest, I have to rely on my “have mercy on me” skills. Even when I try to read the tags next to the pastry of my choice, the woman behind the carbs has no idea what I’m saying. So I point as well, and in Hungarian she identifies the pastry I have indicted. She asks in her native tongue if I want what-I-seem-to-be-pointing-toward, and I nod because it really isn’t worth making distinctions. Whatever she gives me, I’ll eat it.

“One?” She asks and I vaguely remember the number one, but now can’t remember if it is the number two or perhaps some other word altogether. I blink at her. She shows me a thumbs-up, and I nod at that too. This is how she shows the number one on her hands–instead of her index finger she holds up her thumb. I reply with my index finger and she isn’t sure what I mean.

I say, “I can’t speak Hungarian,” which is already so painfully obvious that she bursts out laughing and begins to tell me something in Hungarian as a form of commiseration. Overwhelmed and not able to say anything else, I suddenly answer in Turkish. “Evet,” the word for yes, and other Turkish phrases are the only ones coming to me. Not English language apologies, which may ring familiar, but only Turkish. By some oddly-timed miracle, I am fluent in Turkish. She’s giggling, not understanding, and still going on in explanations of other things I cannot possibly translate. I’m replying, “Evet, evet,” yes, yes, of course, like I know what is happening, though we don’t have a clue about the topic upon which we are agreeing. The woman and I are in near hysterics by the time I have paid and moved toward the door. And we both reach to our eyes to wipe away tears, even unable to say goodbye.

Looking for a Christmas gift? 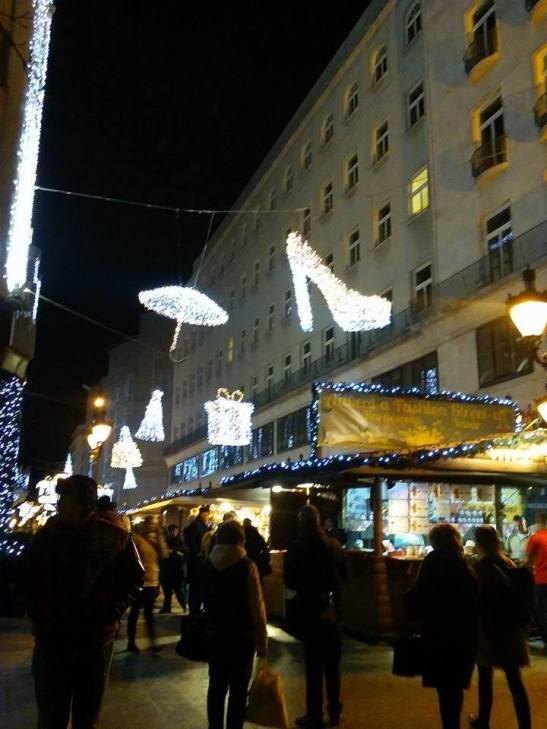 This entry was posted on December 11, 2015 by thenicethingaboutstrangers in Hungary, Inspiration, kindness, Writing and tagged bakeries in Budapest, kindness of strangers, learning a language, pastries in Hungary, patience.