The fact that I am publishing the 400th blog post is totally amazing to me. This all started as a way to sort through notes from my travels. Since then, stories have materialized even when I didn’t expect them. Then readers materialized! Thank you!

Some of you have been here throughout, but many are new friends. You’ve been supportive, encouraging, and kind. So I have a story that I’ve been saving for quite a while. It says a lot about me, I’m afraid. It also says a lot about the blog and my travels, it seems.

Thank you for being so very NICE. 🙂 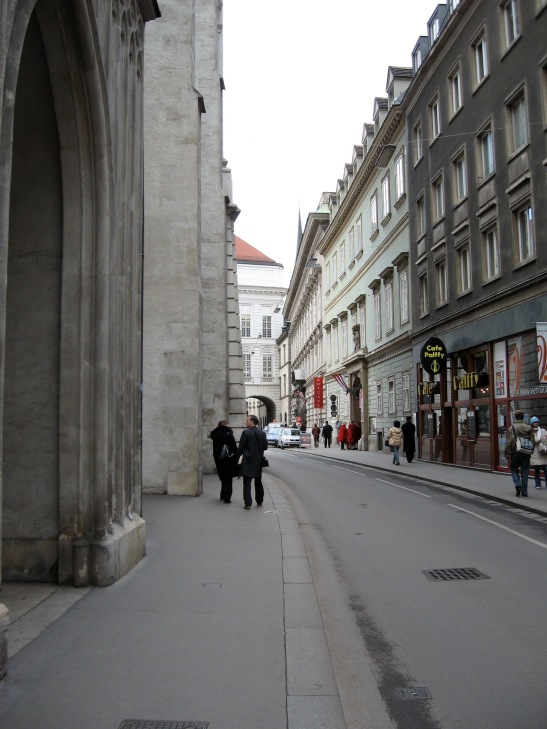 It’s my first trip to Europe, I’m 27. I’m in Vienna’s Albertina Museum. I’m trying to pay attention to Picasso’s distorted ladies and bullfighters. Instead, I keep getting distracted by a handsome guy carrying a sizable novel. The cover is printed in a language peppered with accent marks. Though we make eye contact often and smile, I am still my ugly-duckling ball of anxiety. I do wonder if he may be planning to mug me, even as he gives me shy glances through the exhibit. I’m trying to be like people in movies who go to Europe and find themselves, who never seem plagued by memories of being in junior high or worries about petty crime.

We depart at about the same moment–I with Eric, my dear friend who promised me I would fall in love with Europe, and the guy with a grandmotherly figure. We stand so close at one moment that we almost speak, then we don’t. As we leave, I take a picture of the narrow Vienna street he is treading to catch his departing profile. I spend the rest of the day smiling to myself in amazement at having been seen.

Eric and I roam for another day in Vienna then take a bus to Prague, where Eric is living. I’ll be on my own during the days and will have to conquer my nervousness by heading out solo. Jan–a lovely local boy–tells me which buses to take and avoid, and never to rush for the subway since the trains will be frequent and I’ll look foolish.

So one day, I endeavor the long escalator down to a metro station. A train is arriving, and I know I won’t make it, so I stop to pretend to read an advertisement. People rush out of the train. Someone crashes into me head on. Sorry! My English apology comes first, then he says what must have been sorry in Czech–though I’d been saying that word all day as Hello. After the shock of the collision, we recognize each other for a blink. We start off in our opposite directions, then we both stop. It’s like a yogurt commercial.

Even without the giant book, I know he’s the man from the museum. He walks back toward me and we stand in amazement. His name is Lukas, he studied English in New Jersey. He’s holding a newspaper. He asks how I am enjoying Prague.

Four days and a country away, we marvel at the chance to meet. This is enough. We say our hellos and our goodbyes in the same two minutes. He tells me to enjoy my stay and I promise I will, then he takes the steep escalator up to the street. Even with the nervousness and newness, it does seem I am falling in love with Europe. I take the next metro train without rushing, grinning and delighted to have discovered something so perfect.