A little boy in a blue t-shirt acts tough, strong, fearless. He clutches a toy truck low at his side and eyes the passengers on the train. His father sees a friend near the front of the car, and moves away to talk to him. The boy breaks free of his mother’s grasp to follow his father, to meet the acquaintance, to get another view of the crowd. He travels up on the toes of his rubber shoes.

The boy studies a few children in the car with a raised eyebrow, an expression his father shares.  Nearby are a boy about his age and twin girls with white skirts and sequins.  His mother calls, “Gel!” Come. In her direction he tosses a tiny dismissive movement, another mannerism lifted from his father.

As the boy scans the crowd, he spots two elderly women with their heads covered. He gasps and backs up to his father, but seems drawn to keep returning and peering at them. One woman blinks at him, then waves her fingers, and he stumbles backwards. He hustles away as the women chuckle.

A few minutes later he continues his observations. As though he’d forgotten they were there, he spots the women, panics, and flees again. Now the amusement is contagious. The women laugh, boy’s father apologizes quietly and laughs, the friend laughs, the children laugh. Finally, the boy laughs too, not sure why. He joins in until he again spots the mysteriously scary women and rushes straight to his mother. 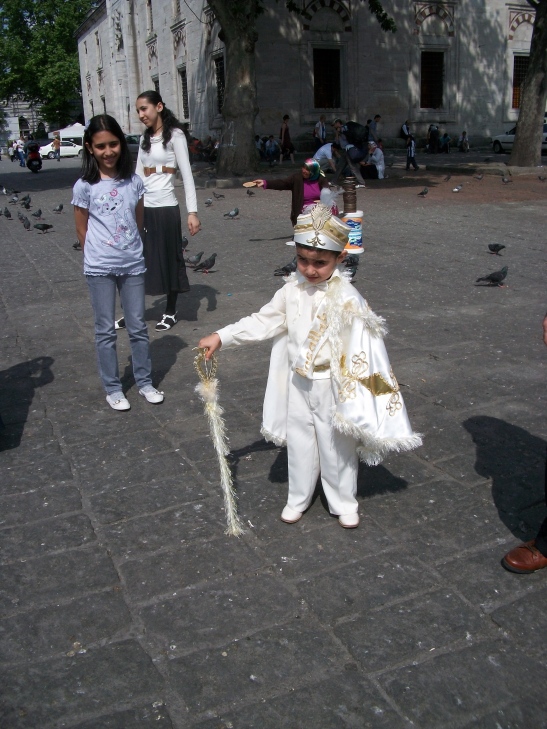 This entry was posted on May 17, 2013 by thenicethingaboutstrangers in Blogging, Europe, Happiness, Inspiration, Travel, Writing and tagged children, fathers and sons, Izmir, mothers and sons, public transportation, travel in Turkey, Turkey.