The pair meets in the Kültürpark, a space filled with palm trees, joggers, idle folks napping on benches, doing Sudoku on benches, staring into space on benches. A grandfather takes his small grandson around the perimeter on a whisper-silent moped so the visitors can only hear their approach by the tiny, growing laughter. A stray cat pauses in the greenery to let a stray dog pass.

The pair spots each other. He climbs up from his place under a tree to greet her, to watch from his feet as she passes a bored security guard manning the gate and waits for slow joggers to clear her path to him. She wears an orange scoopneck shirt and her hair wound up in a bun. They hug. They hug with their torsos together, but then lean back from each other while still holding on–no kissing, no lingering close–so it is hard to gauge their relationship. They pat each other. He on her lower back five times with both hands, she on his shoulders four times, then he on her back again four times.

They sit and chat as the heat of the day lifts, as a cool breeze finds its way from the water. And they sit with a distance between them, but still close. They let on their pleasure at being in the same place, but not much more. They rest their hands on their knees.

The officer watches them between scuffing his shoes on the cement and glancing at the gate he’s supposed to be guarding. He stretches, twists at the waist, then looks back again at the two rather boring people under the tree, behaving themselves immensely. 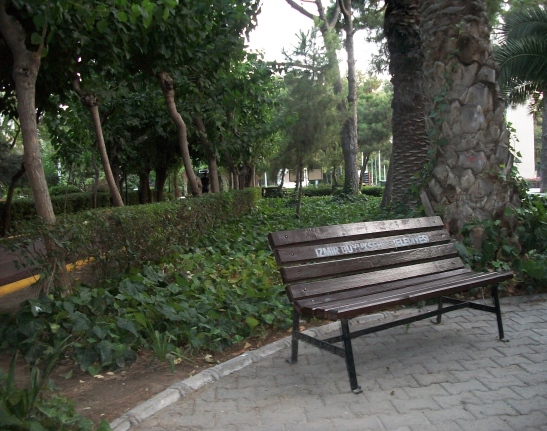 Just the greenery, not the scenery. I protect my strangers.