The Lost Tourist as Herself

Mothers walking with daughters needed time to assess whether to engage strangers, especially strangers who smiled too much and managed to turn up lost just past the auto repair shops in Şişli. The young mother and her daughter always walked the same route, but on that afternoon they happened upon something new: a wayward tourist asking directions to Taksim from tea-drinking men who likely hadn’t spoken to a foreign woman before and certainly didn’t know how to simplify their instructions.

One man walked the tourist to the street and pointed to the start of the route. Then he added such a series of “left turn, right turn, straight on, over and under” that although it was the young mother’s native tongue and daily path, she herself would have gotten lost. Meanwhile, the tourist nodded politely without comprehension and the confidence faded from her still-present smile. After excessive thank yous, the tourist prepared to cross the street anyway and follow what she could discern of the directions. The young mother took pity and joined her at the side of the road, where they looked down a line of speeding cabs and semi trucks. The young mother spoke, but received a sheepish shrug and stuttering apologies about the tourist’s slim knowledge of Turkish. So the mother waved the stranger along, like communicating with her daughter when she was small.

The mother had pale green eyes and kind hands that her daughter clutched periodically as they walked. The little girl practiced the English she learned in school, “Hello, how are you?” And the tourist answered in English, then asked in Turkish, “How old are you?” The girl smiled and held up seven fingers, slowly enunciating, “Yedi yaşındayim.” The mother relaxed, tried briefly to engage the tourist in basic phrases, then decided just to let her follow along. Instead, she spoke to her daughter and periodically glanced over at their curious charge.

On a hill that went straight upward, they weaved between paused traffic. The daughter ducked under sideview mirrors on trucks and didn’t notice the long looks the men inside directed at the tourist and her guiding mother. It took nearly twenty minutes to reach their destination, the tourist accustomed to a hurried pace trudged along behind the slow-moving guides, too grateful to rush them.

As the mother led the trio into the main street, she noted the flash of recognition that came into the stranger’s smile. All tourists knew this area. So finally it was acceptable for the mother to say goodbye, to nod, to smile as well, to gather her daughter’s hands and to disappear into the crowd. 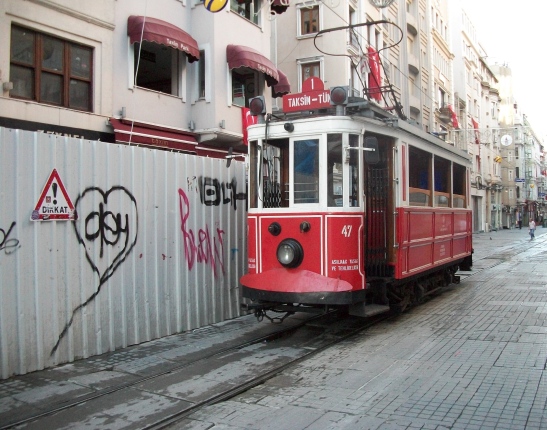 7 comments on “The Lost Tourist as Herself”