The Guy in Sunglasses 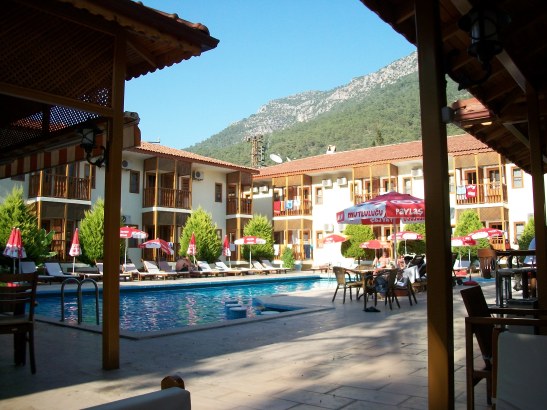 He was his sunglasses.  He could see perfectly well, but these were as much a part of his outfit as his long black ponytail. Reasonably, he wore the sunglasses while his children monopolized the swimming pool. Then he wore them in the lobby while reading the newspaper and chain-smoking.  He wore them in the morning as he cut in front of other people waiting for tea and drained the last drops without compassion. He wore them in the dinner buffet line as he pointed to the fish he wanted and the chicken he did not.

However, upon checking out, he thoughtlessly propped his shades on the top of his head. As he crossed the hotel hallway, his eyes showed. This didn’t mean he looked around while dragging his huge suitcase down the narrow passage, without yielding to anyone, thus forcing the other guests to flatten themselves against the walls.

But it did mean that one could see his eyes when he tripped down the set of stairs that led to the lobby. It meant the brothers and sisters tiring of ping-pong and the women waiting for their husbands, and the employees with nothing to do could see him completely.

He stretched forward, lunged, trying to find the ground beneath him. When he caught his balance and was no longer in danger of falling, his eyes flashed and he became the little boy without many friends. He looked like any kid without a place to sit in the lunchroom. Maybe even the British woman whose toes were casualties of his suitcase would reconsider her curses if she saw him there, jerking his sunglasses over his flushed face as he marched for the exit.

13 comments on “The Guy in Sunglasses”