The Reason to Rush

Two pretty young women are walking down the street, close in pace, but not together. A blonde in shorts my-mother-would-never-have-let-me-leave-the-house-wearing is staring down at her phone. The other, more modestly and inconspicuously dressed, is taking in the street ahead, slowing her gait a bit, trying not to keep the same pace as the distracted one.

About a block behind them, a man approaches quickly, hurrying like he will catch someone. I wonder which of the women is his reason for rushing as he speeds to a jog. I enjoy love stories as they draw near and depart, but he dashes past them both.

Ahead of them all, a toddler races in their direction, giggling in time with each step, arms outstretched, overjoyed to see Daddy. They meet and he seizes the child in his arms. They spin together in a rejoicing hug. Mom and another sibling follow to the meeting point, with gleeful and envious squeals from the child in Mom’s arms. Then Dad accepts both children, each climbing into his embrace, each holding one of his shoulders, and the delight fills the street. Even the immodest one looks up from her phone as they pass. 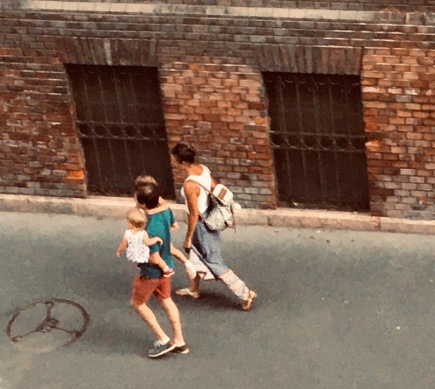 2 comments on “The Reason to Rush”

This entry was posted on August 24, 2020 by thenicethingaboutstrangers in Travel.