Surely there’s a lesson about human beings in relation to God when every visitor to the Virgin Mary’s House ignores the plentiful signs not to take photos. They are warned outside on large silver signs. At the door there are stencils of cameras surrounded by a red circle and a slash, inside signs are on an entry alcove and the main room in both English and Turkish. A majority of the visitors try it anyway, hoping to get away with it, breaking such a small and seemingly unimportant rule, and who could it harm? Even as their loved ones whisper about following the rules, usually even then people try. Sometimes they try it quietly, surreptitiously, a phone held at waist level or a look in the opposite direction.

There are two men on guard to remind them, every five seconds, “No pictures, it is forbidden.”

All the while, a sculpture of Mary waits on the altar, arms open and smiling, greeting her disobedient children as they pay her a thirty-second visit.

Your rule-abiding author would like to note that photos are allowed outside. 🙂 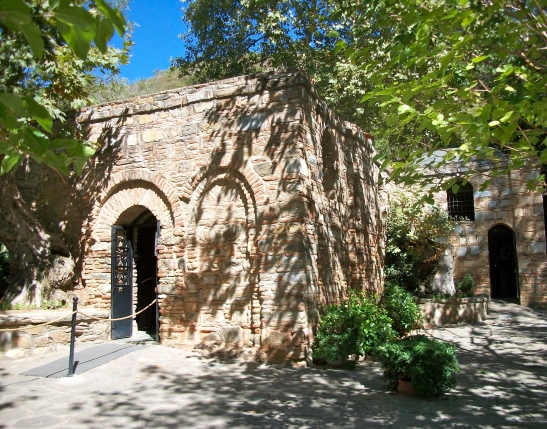 9 comments on “The Disobedient”

This entry was posted on October 5, 2016 by thenicethingaboutstrangers in Travel, Turkey.