Guest Post: Rachael Hanel. We’ll Be The Last Ones To Let You Down. 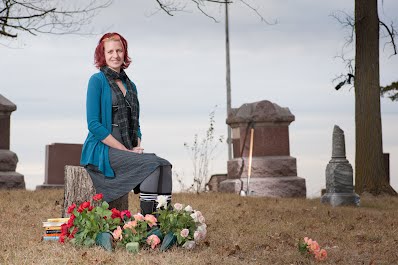 Thanks so much to Paige for allowing me to guest post on her fabulous blog!

We’ll Be the Last Ones to Let You Down: Memoir of a Gravedigger’s Daughter, reflects on my years growing up in small-town Waseca, Minnesota, where my dad indeed was the local gravedigger. This background gave me a unique perspective on both life and death.

I wanted my book to evoke a deep sense of place. My own roots run deep in Waseca. My grandparents settled in Waseca County to farm the rich, fertile soil—my paternal grandparents in the northern part of the county, my maternal grandparents right in the middle. All sets of my great-grandparents lived in southern Minnesota, landing there after emigrating from countries such as Poland, Czechoslovakia, Germany, and Ireland.

To my knowledge, my maternal grandfather never flew on a plane, though he took a long car trip west to Washington state to visit relatives in the late 1960s. I don’t think my paternal grandfather was ever on a plane. My own parents were nearly 30 years old before they traveled by air.

I don’t get on a plane often—maybe twice per year. I love to get away and if I could afford it, I would travel much more often. But I would always come back.

I spent one year living in Minneapolis after high school, but otherwise I have always lived within 30 miles of where I grew up. While these circumstances were common in my parents’ or grandparents’ generations, they are becoming less common now. I know few of my peers who can say this.

I write about this tie to the land in my memoir:

“[My husband] and I sometimes talk of moving away. The beauty and cool and adventure of Lake Superior’s North Shore call us, we who have never lived anywhere else except the farm prairie. But even now, even in the preliminary stages of planning to move–stages so early we can’t even say for sure it’s going to happen–I know what I would long for if we were away. I would long for the soil. The soil in which my grandfathers worked, in which my father worked. I would miss the dirt more than anything. I feel the pull, like people afflicted with geophagy, the desire to eat earth. I don’t want to eat it, but I do want to ingest it, to have it live within me. I want dirt molecules to rise up and sink into my bones, like how it became the very being of Grandpa and Dad, so much so that they could not have done anything else and been happy. Tearing them away from the dirt would be to kill a part of them. They worked in the dirt until their last days.”

I read about Paige’s travels and think, “Yes! I want to do that!” I daydream, briefly, of what it would take to move to England or Turkey or Ireland. But in my heart, I know it’s not for me, that the place where I have always lived is what gives me my identity and ties me to the people who have come before me.

Buy it locally or you can buy it here: http://www.amazon.com/-/e/B001JRULWA

13 comments on “Guest Post: Rachael Hanel. We’ll Be The Last Ones To Let You Down.”